How Much Will COVID-19 Impact Automotive R&D Spending?

【导语】 Virtually all automakers and suppliers expect to reduce R & D spending this year due to the effects of the coronavirus, according to a global study conducted by IHS Markit.

Virtually all automakers and suppliers expect to reduce R & D spending this year due to the effects of the coronavirus, according to a global study conducted by IHS Markit.

That’s not surprising, considering sales and production have been at a standstill for the last month. 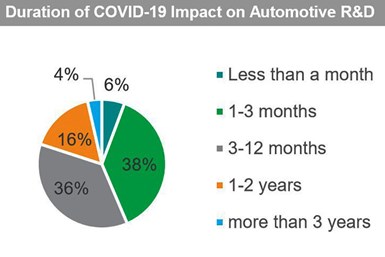 But respondents are relatively optimistic about the industry rebounding in 2021.

Some 140 companies took part in the survey, which was conducted between March 30 and April 9. Respondents were evenly split among Europe, North America and Asia. Of the total, 70% of the participants came from suppliers (mainly sales and marketing personnel), while the other 30% work at OEMs (mostly engineers and R & D types).

With cash flow drying up, IHS notes, automakers and suppliers are looking to shore up their finances by preserving cash and other “non-critical” expenses, including spending on electrification and autonomous vehicle technologies.

However, only 28% of those polled expect COVID-19 will negatively impact revenues beyond the next 12 months. Even fewer (20%) believe R & D spending will be affected at this time next year, which suggests that some companies plan to maintain current research levels even if revenue levels don’t fully return.

More than two in five respondents say combined r&d spending will be impacted for only three months or less due to COVID-19. Slightly fewer (36%) believe the effect will last 3-12 months.

On average, respondents predict current budgets will dip 13% for development programs and 17% for advanced research this year. The declines for 2021 programs are projected to be 8% and 12%, respectively. IHS says the difference shows that companies are prioritizing resources on near-term product launches.

One in four respondents indicate that mature development projects could be postponed by 6-12 months. For projects that are at an early or conceptual stage, 23% of respondents expect delays of one year and 11% foresee longer deferrals.

Responses differed by region, company size and between suppliers and carmakers: 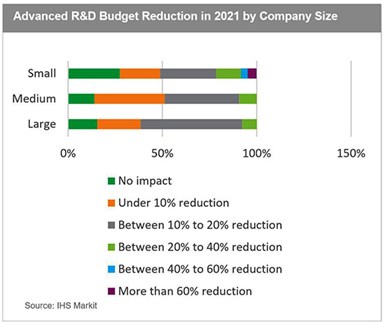 1. North American respondents were by far the most optimistic about a quick turnaround (less than 3 months). Those in Asia (China in particular) were the most concerned that a rebound could stretch more than 3 years).

2. OEMs generally were more upbeat than their supplier counterparts, with nearly half predicting r&d spending will return to normal after 3 months.

Company size also matters when it comes to bringing R & D work in-house. More than 50% of respondents from large and medium-sized firms indicate they expect somewhat or significantly more work to be done internally as a result of the pandemic, compared with about 40% among smaller companies.

Electrification and Autonomy to Suffer

Electrification and autonomous vehicle technologies are the most likely programs to suffer budget cuts as a result of a coronavirus-fueled slump, according to the survey.

Some 22% of respondents list electrification (including battery, traction motor and power electronics) as the most-impacted technology. This is followed closely by autonomy (Level 2+ to Level 5) at 21%.

OEMs tend to be more pessimistic than suppliers regarding electrification, while suppliers are gloomiest about automation.

COVID-19 also is expected to affect the rollout of new regulations of everything from fuel economy and emissions to autonomous vehicles/active safety, cybersecurity and traffic control.

Almost all respondents predict there will be an impact on new fuel economy and carbon dioxide regulations, with many expecting delays regarding the stricter European standards (95 g/km of CO2) currently being phased in. 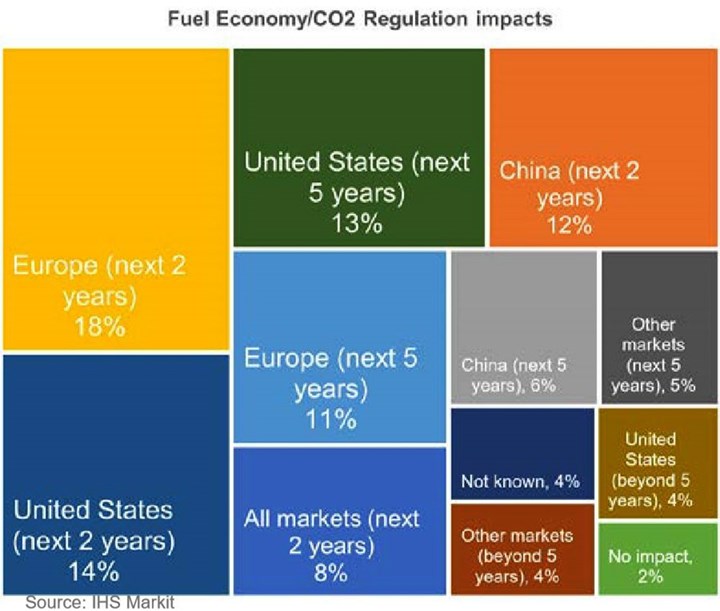 Three in five respondents expect an impact on standards for autonomous vehicles and active safety. Some 16% believe the regulation of 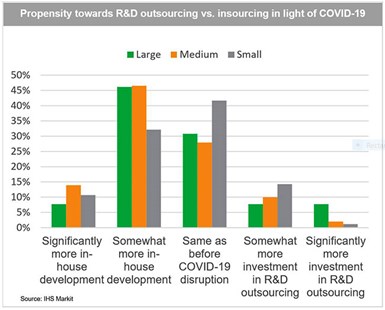 autonomous vehicles is likely to be delayed in all markets.

At the same time, the vast majority of respondents say government aid would be more important than ever to support advanced research.

The majority of respondents don’t expect investments in startup companies to be changed as a result of COVID-19.

But, in the comments section of the survey, several expressed concerns about the long-term viability of some R & D-focused startups. This is especially true of those involved in emerging technology areas, such as lidar and autonomous driving software. They also said fledgling EV companies could be in danger.

Tightening budgets also are expected to drive greater consolidation, a trend that IHS notes had started before the pandemic. Some respondents suggest that mergers and acquisitions could help companies sustain their r&d budgets in the coming years.